On Friday January 3rd, Iranian Military General Qasem Soleimani was assassinated at Baghdad airport by a US airstrike approved by President Donald Trump. In response to his death, The Pentagon stated, “Soleimani was actively developing plans to attack American diplomats and service members in Iraq and throughout the region,” and that the “strike was aimed at deterring future Iranian attack plans” (Business Insider).

There have been many mixed reactions to this move. Many supporters have claimed that the attack was justified. Jim Inhofe, member of the Republican party and chairman of the Senate Armed Services Committee tweeted, “From al-Baghdadi to Soleimani, America’s adversaries should have no doubt that @realDonaldTrump means what he says. America does not and should not seek war, but it will respond in kind to those who threat-
en our citizens, soldiers and friends – as the President has long promised.” In a follow up
tweet he added, “De-escalation is preferable and possible – but only if our adversaries choose it.” At the same time, critics have blasted the risky decision. Nancy Pelosi noted that the airstrike was conducted without the consultation of Congress (Time). Utah Senator Mike Lee echoed similar concerns, and on CNN’s talk show “State of the Union”, he declared, “When something like this happens, when events are unfolding quickly, events that will have a profound impact on national security and military strategy, Congress does need to know about it, in part so we can evaluate the scope of our authority to act or choose not to act,” he continued, “We didn’t get that. And that was disappointing” (Politico).

Tensions with Iran have undoubtedly been rising, especially after the assassination. Regardless of the pressure, Iranian leaders have accentuated the importance of “patience.” Brigadier General Abolfazl Shekarchi (senior spokesman for the Iranian military) mentioned to Iran’s Mehr news agency that “We will set up a plan, patiently, to respond to this terrorist act in a crushing and powerful manner,” he went on to say, “We are the ones who set the time and place of our reciprocal response” (The Washington Post). Iran also acknowledged that it would no longer follow the Joint Comprehensive Plan of Action (also known as the Iranian nuclear deal) established in 2015, but that they would still operate with the International Atomic Energy Agency.

The general public has also had much to say regarding the situation. There have been numerous anti-war protests across the nation. Act Now to Stop War and End Racism are amongst the many unions raising their voices against the threat of war. Individuals are learning of current international news through social media. This easy access to knowledge demonstrates the importance of reading reliable information. Mrs. Sibilia, a history teacher at Ramapo High School, noted that individuals “cannot only listen to soundbites or look at the headlines” and that as Americans, “We have to do our research. We need to look to history to learn how we arrived at these current global conflicting issues. We need to look at American-Iranian relations within the last 50 years to understand the problems of today and the predicament we find ourselves in now.” 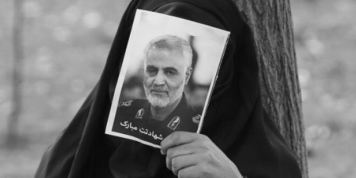 A woman holding up a picture of General Qasem Soleimani