Max Pernetti has been a wonder to watch on the basketball court throughout his career at Ramapo. Having played since 1st grade on a multitude of teams, Max has finetuned his abilities over the years.

It is clear that Max has a love for the sport and the team he plays on. When asked what he loves most about playing on the Ramapo team, he said, “My favorite part about playing on the team is being able to play high school basketball at such a high level and compete against great competition night in and night out while having fun with my teammates.” Max’s dedication to pushing his teammates and his mentality to leave everything on the court has obviously aided the basketball team this season. While putting up exceptional stats of 16 points per game and 10 rebounds per game, he has led the team to a positive record of 8-3.

Max’s success on the court throughout his career has been recognized nation- wide. After this year, Max has decided to take his talents to Gettysburg College and play for Bullets.

All and all, Max attributes his success to his family, friends, teammates, and coaches. Max said, “They always push me to do my best.” Leaving for college next year, Max explained that he’ll miss the Ramapo community. He wrote, “Everyone has always been so supportive of me and the team. That’s something that has always pushed me to do my best.”

Ramapo High School will surely never forget the excitement Max Pernetti has brought to the basketball team. We will miss you on the court, and wish you good luck next year, Max! 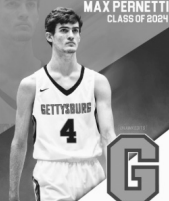