Eden Osiason has been known for her accomplishments in athletics throughout her time here at Ramapo. As a member of both the gymnastics and fencing teams, Eden has amassed eight varsity letters. Currently in her final season of Ramapo athletics, Eden has been vital to the team’s recent success. This year, Eden is the fencing team captain and the foil squad captain. Eden’s outstanding fencing performance was recognized across the county when she placed second as an individual at the Bergen County Tournament (nj.com).

Throughout her time at Ramapo, Osiason has always enjoyed participating on teams with her friends, and she brings a playful competitive spirit to everything she does. When asked to comment, teammate and friend Sarah Chagares said, “Eden is a great leader to the whole team. She is always positive, and she encourages everyone to do their best!’’ As the fencing team’s only senior, Osiason serves as an important role model for the team’s younger members.

This year Eden has also showcased her leadership abilities around the school. Eden is a senior ambassador here at Ramapo, setting an example for incoming students. Fellow ambassador, Mike DeFalco said, “Eden is a great leader and always helps organize our group.” Eden is also notable for her role as co-editor in chief of Rampage, an activity that displays her dedication to the Ramapo community. Eden sacrifices countless hours including her Friday afternoons and many lunch periods to organize and edit the paper’s articles and layout.

Nearing the end of her time in high school athletics, Eden humbly expresses her gratitude stating, “Being a part of the fencing team was one of the best experiences I had at Ramapo. I was able to make friends in different grades and learn the value of teamwork. No matter what, I could always count on my teammates and coaches to support me and cheer me on. I will always be grateful for that.” Next year, Osiason is looking forward to continuing her academic career at Brandeis University in Waltham, Massachusetts. Ramapo will miss seeing you fence and wish you luck at Brandeis and beyond! 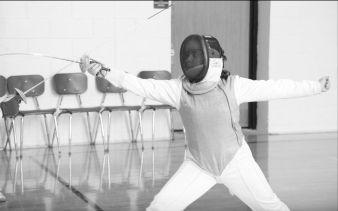