As the winter sports season starts many join the popular and better-known sports such as basketball, hockey, and fencing. The one sport at Ramapo High School that does not get nearly enough recognition is the swim team. Personally, I am biased on this due to my involvement with the team since my freshman year. As a senior, it is good to reflect on what makes this sport stand out from the crowd. The team is small, with a maximum of 36 people on the team, and we treat each other like a family, cheering everyone on during our races and pushing one another to “Go for the Gold.”

While the team has supported one another meet after meet, providing each other with motivation for their upcoming races, we could not have gotten this far into the season without the leadership of the senior captains: Gabby Mackle, Hans San Luis, Molly Arts, Grace Gifford, myself and Justin Landsman. Time flies as it felt like yesterday we were all freshmen, trying to find our strongest stroke and establish a time that can be beaten meet after meet. Now we are all seniors leading a group of underclassmen that are eager and motivated to swim fast. I asked Hans San Luis why he chose the swim team, he said “I chose swimming because I knew it would be an opportunity for me. When I was young, I hated sports because I was too lazy to put in the effort to improve….By the time I got to Ramapo, I didn’t have the experience and strength that’d allow me to play soccer or basketball. But what I could do is swim. I obviously wasn’t the best, but I was willing to push myself to make myself better.” Hans continues to keep the team’s morale in high spirits and keep a friendly environment. I also asked Gabby Mackle to speak to the same question and she responded plain and simple: “I am on a club swim team and I wanted to swim for my school. I thought it would be really fun to swim and be with my friends at the same time.” When asked how it feels to finally become a captain Hans had this to say: “Growing up since freshman year has felt very rewarding. As a freshman, I was one of the slowest swimmers on the team. Eventually, I improved my technique and built up my stamina enough to keep up with everyone else. I’m proud of what I’ve made myself into. …Being a captain of a sports team, in general, is something I wouldn’t have expected at all. I’m very grateful that I’ve come this far as a swimmer.” Gabby piggybacked off of Hans’s answer by adding “It’s so crazy thinking about how I used to be a freshman on the team and now I’m one of the senior captains. I knew I wanted to be captain for the longest time and it’s so fun getting to tell all the underclass- men about how fun the team is every year.” Everyone on the team comes from different towns and from different homes but there is one thing the team as a whole has in common, it’s their love for the sport and determination to do better, and it could not have been possible without the fantastic senior leaders that have stuck with the team since freshman year. 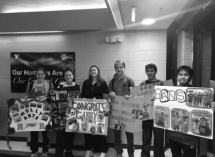