Brexit, Britain’s departure from the European Union, was first announced in 2016. It caused instant chaos with then Prime Minister David Cameron leaving office and the value of the Euro dropping dramatically. The public had voted to leave but the government had no clear plan of action. After numerous deadline extensions, Britain was meant to present a finalized Brexit deal to the EU by mid-October, but Parliament
rejected plans put forth by Prime Minister Boris Johnson. The British government was then forced to ask the European Union for yet another extension causing protests outside of Parliament (The Washington Post).

Many of the conflicts with previously proposed Brexit plans stemmed from problems at the United Kingdom’s borders. Parliament has not finalized plans regarding trade overseas or the border on land in Ireland (BBC). Most recently, Boris Johnson pro-
posed a “two borders for four years” plan in which a sea border would regulate trade, and a separate border between Northern Ireland and the Republic of Ireland would regulate customs. These two borders would remain in place for four years when a new solution would have to take effect (The Telegraph). The deal was rejected by Parliament, forcing Johnson to ask the EU for an extension. The EU has since agreed to extend the deadline until January 21, 2020. Now, a newly elected Parliament must devise a plan that will work for both Britain and the EU.

This extension has created a rise in partisan tensions within the UK. This election season has been largely devoted to discussions about Brexit, with Boris Johnson pressuring members of his conservative party to support his plan and the opposing party repeatedly rejecting Johnson’s plan (Reuters). Financial analysts also worry that this prolonged
divorce process will hurt the UK’s economy and lead to a drop in the value of the british
pound (CNBC). 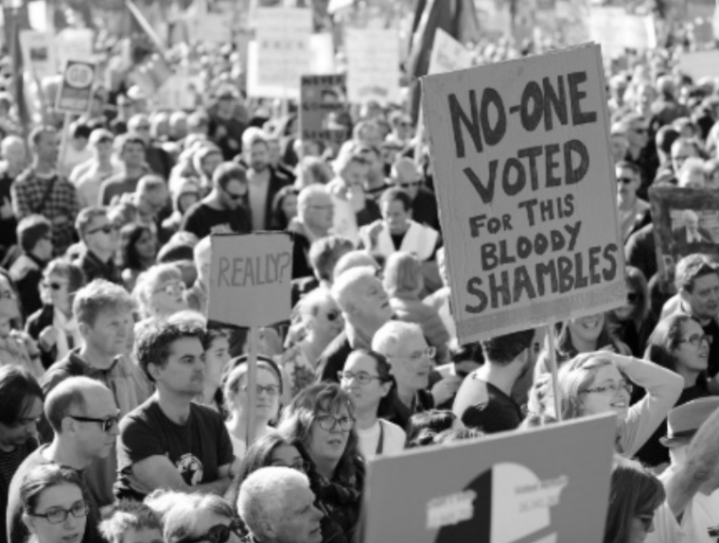 Protesters outside of Parliament after it was announced that Britain would ask for an extension from the EU. Photo credit: The Independent

Despite the many struggles Britain will face before the January deadline, there is still good news. This deadline extension is far better than a “no-deal Brexit”, in which the EU would settle on the harshest terms possible without negotiation (BBC). Brexit has proved to be an unpredictable process, but it may finally be over soon.