After 40 years, seven sequels, and two remakes, Michael Myers is back! What made the original Halloween so effective and terrifying was how simple it was. Halloween was made by John Carpenter on a very tight budget of only $300,000, yet the final product generated $70 million at the box office worldwide and is now regarded as one of the scariest films of all time. Later Halloween films, especially the Rob Zombie remakes, went a little too “Hollywood,” and the bigger budget and cinematic polish resulted in a less engaging and effective experience.

Halloween is scary because of the randomness of it. It’s a simple story of a deranged psychopath escaping a mental institution and going on a killing spree. Its low budget made it all the more scary. Carpenter managed to terrify audiences with nothing but a now iconic score, inventive cinematography, tension, and a truly terrifying force of a villain. That’s all you really need to make a truly memorable horror movie. Another mistake the sequels and remakes made was the decision to humanize Michael Myers. In the original Halloween, Nick Castle, the actor who played the role, was credited merely as The Shape, while in Halloween II, it was revealed that Michael was protagonist Laurie Strode’s brother. Not only that, director Rob Zombie focused his remake and its sequel almost entirely on Michael’s tragic past. This infuriated many hardcore Halloween fans, who enjoyed the enigmatic and supernatural quality of the original Michael Myers. Audiences don’t want to see his face and don’t want to know anything about his family and relationships. In other words, they want The Shape, not Michael Myers.

Although it’s the franchise’s eleventh entry, Halloween (2018) serves as a direct follow up to the original Halloween, ignoring all previous sequels. Halloween: H20 tried doing something similar 20 years ago by ignoring everything other than Halloween and Halloween II, although the results were mixed. After four decades, will this be the sequel that gets it right? With production company Blumhouse Productions, writer Danny McBride, and director David Gordon Green on board, it seems the filmmakers are pulling out all the stops. More importantly, Jamie Lee Curtis is reprising her role as Laurie Strode, Nick Castle is donning Michael Myers’ mask once again, and John Carpenter is returning to produce as well as compose a new and original score. The approach to Laurie’s character seems especially intriguing, as her traumatizing clash with Michael years ago left her eager for a rematch. Their final(?) showdown should make for a fitting end to an iconic horror series. After 40 years, The Shape finally comes home. 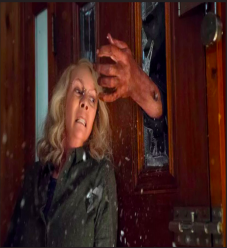